Ok, ready, here’s the bad news: A phenomenon is happening that has left college counselors, parents and students alike both disappointed and alarmed.

Many top students in famously competitive high schools are accepted by top-tier schools like Washington University in St Louis and NYU but waitlisted or rejected by “safety” schools like UC Davis and UCSB.

We are talking about students with GPAs of 4.0 (unweighted) and 4.3 and higher (weighted) and near perfect SAT/ACT scores. Traditionally, UCs other than Berkeley and UCLA are safety schools for the best students from Californian high schools. Recent trends only go to show that things have changed.

Most UC campuses witnessed a record high number of applicants this year. According to insidehighered.com, overall, applicant statistics are at a 5.7 percent increase. The largest increase was not at Berkeley, which was up only 4.6 percent. UC Riverside saw the largest percentage increase ─12.2 percent. Five UC campuses ─ Berkeley, Irvine, Los Angeles, San Diego and Santa Barbara─received more than 100,000 applications each. San Diego's total is up 9.7 percent. Davis has 95,000 applications, up 8.6 percent. (By way of comparison, Stanford University received only 47,451 applications last year.)

There could be many reasons for the surge in popularity of the UCs and I will not attempt any exhaustive analysis here. The quality of education from these campuses have been gaining renown. California cities are hubs for jobs, much more than ever before, especially with the expansion of industries in the Silicon Valley showing no sign of any slowing down. Unfortunately, funding and other resources may not match up with the surge in numbers wanting to get into these schools. So, what was previously thought as “safety” UC campuses and some California State campuses have gone up significantly in competitiveness, and the trend is likely going to stay on as permanent fact.

Other Top Schools Not Getting Easier

To add on to the grim picture, the top of the top schools, like the Ivies and their close cousins like Stanford, U of Chicago and Johns Hopkins, continue to seem out of reach for students who are supposedly top of the top at their schools.

With applications being made easier through platforms like the Common App, students are finding it easy to apply to multiple schools without much extra effort. If their parents can afford the application fees, students would simply apply to even schools they know are (out of) “reach” schools but they nevertheless want to give it a (long) shot.

The number of applicants to the Ivies has been gradually increasing over the years. With the enrollment staying stable, these schools are getting more and more competitive if one were to go by the figures. 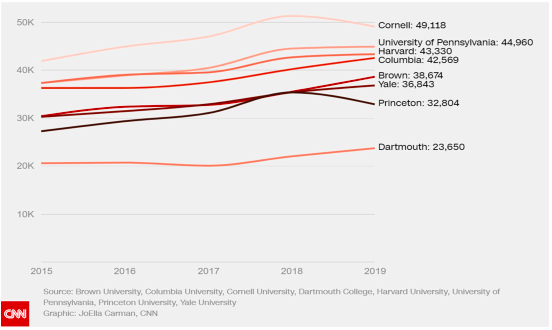 What is not widely publicized is that up until 2019, top colleges have an important incentive to attract as many applicants as possible: acceptance rate count towards the ranking of schools.

With enrollment staying constant, the more applications as school receives, the lower its acceptance rate and the higher its ranking. To compete with other top schools for a higher ranking, colleges want to attract as many applications as possible. It makes sense, therefore, for colleges to aggressively market themselves to high school students, even those who have absolutely no chance of ever making it through their doors.

Keep Calm and Find Your Path

Given that getting into a top-tier college is getting harder. Where do we go from here?

Find your path. This is my motto which explains the modus operandi of my work with students (and parents) I counsel.

Amid the panic and various anxieties, the one thing to keep in mind is that the college one attends is not the be-all and end-all of life. Sure, one hopes to have a great education for further success down the road in life. It would be nice to have some bragging rights too if one graduates from a “brand name” school. (Note that I am writing this against the backdrop of the college fraud scandal that has shaken the country).

But, know that there is more to getting into the schools that everyone else you know seem to be reaching for. In an interview with CNN (April 8, 2019), Julie Lythcott-Haims, a former dean of admissions at Stanford University emphasizes this: There is this sense of scarcity ... when in actuality there are 2800 accredited four-year schools in America. A Gallup poll in 2014 shows that when it comes to whether a person feels they are thriving in every aspect of their lives, including financial well-being to intellectual development to friendships to a sense of community, it does not matter whether one went to a top 100 school or not.

Getting a good education that will prepare you with skills and opportunities for later in life should be the most important goal in college. Availability of courses and faculty for what you want to learn, mentoring from faculty and opportunities offered by the college should be one’s primary consideration and not how “famous” a school is. There are also other factors such as the geographical location and the culture of a school, among many others. I like to tell students that even if they were to get into a school with a desirable “brand” name, they need to ask themselves how they would fit in and how they would thrive there.

That said, I always tell students to shoot for the moon so that even if they don’t get there, they are among stars. But more importantly, I also remind students to have their feet firmly on the ground and aim for realistically achievable schools.